The waterfall at Elohee cascades almost 100 -feet down the mountain side.  The waterfall is visible from both the yellow and red trails, and it is the central element around which Elohee’s Thanksgiving House was built.  Railed Hobbit steps wind down from the red trail to the base of the waterfall which is a circular pool outlined by large rocks.   A red bridge allows for stream crossings to the yellow trail and acts as a unique spot for bridging ceremonies.  Surrounding this idyllic scene is a landscape of Rich Cove Forest which adds to the picturesque magnificence. Red maple, oak, basswood, and poplar are only a few of the types of trees which grow in the cove.  Spring wildflowers and medicinal herbs also flourish in the cove, while moss and decaying logs make the damp forest floor suitable for a wide variety of salamanders.  This is one of the most diverse ecosystems found outside the tropics.

Barely visible among the numerous trees and positioned off in the background,  a stone bench provides a space for reflection.  In this space, what is most prominent is the ever- rushing sound of the water as it falls. Depending on the weather, the water either bounds smoothly off its rock base eliciting a gentle rippling sound,  or it crashes aggressively against the rock wall with a force full of rage that lets its power be known to all in earshot.  The waterfalls’ burble is the Siren’s song of Elohee – awakening one to remember both the transitory nature of this moment and also its importance. 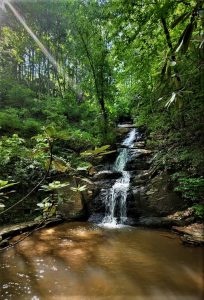 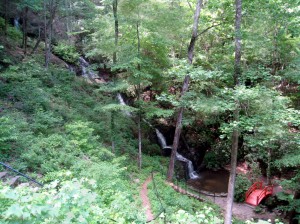 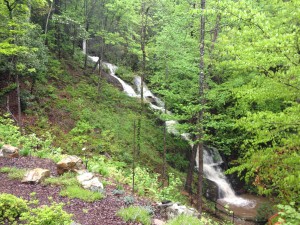 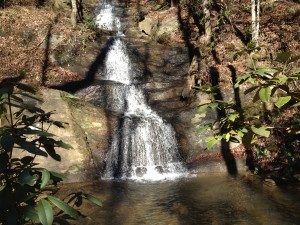 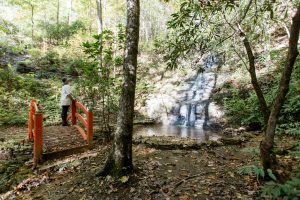 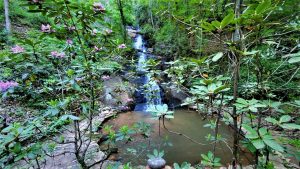