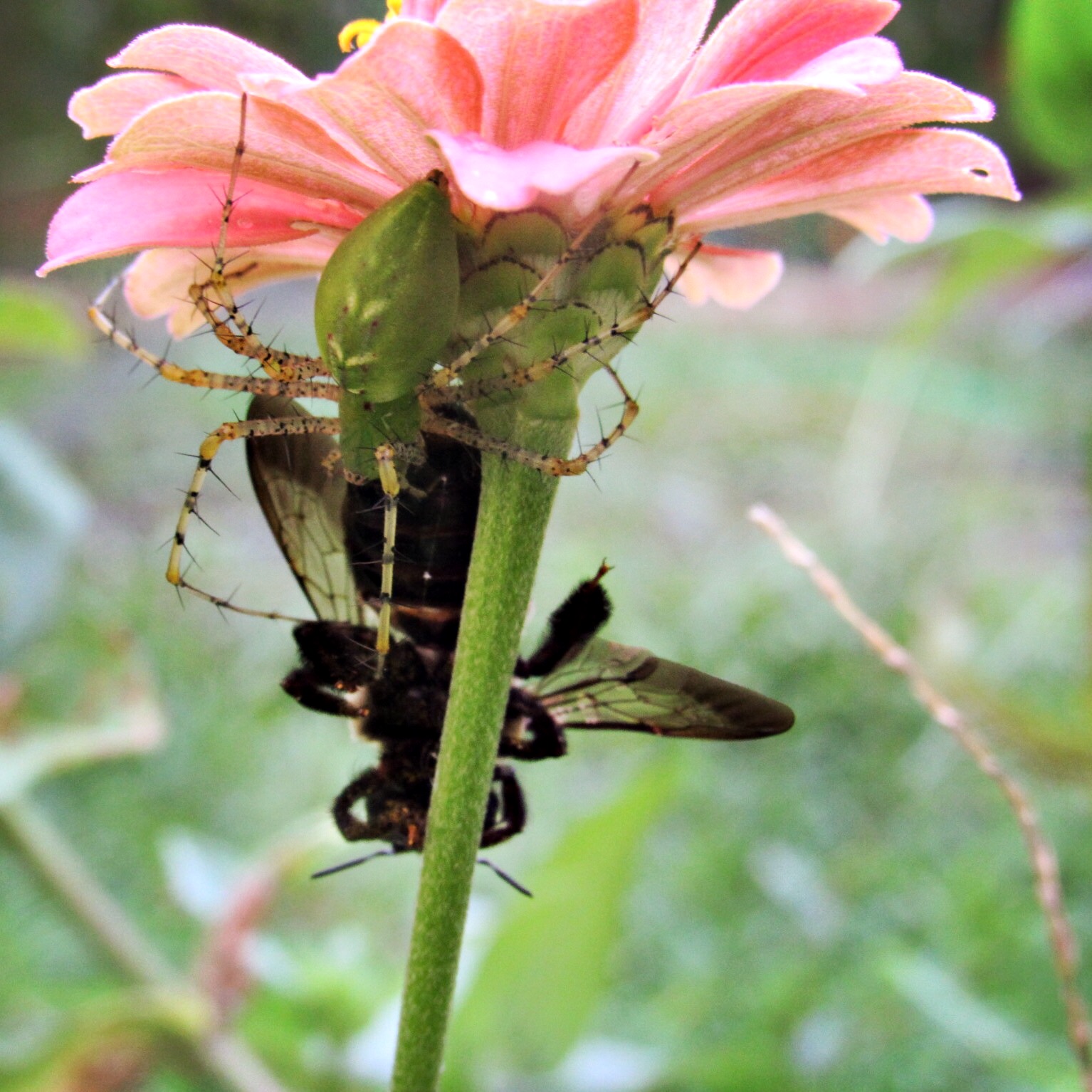 There she was. Hungry. Perfectly still. Almost invisible in the light, entirely camouflaged waiting for her next meal.

Could she? Would she be lucky enough to snag a butterfly or bumblebee?

Just like that, unknowingly a bumble bee so intoxicated by the sweet smell of the nectar drifting in the wind arrives aware of nothing else. It buzzes eagerly into its landing so fixated on the nectar that it settles in quickly and extends its straw-like proboscis down into the recesses of the flower and begins tasting the ambrosia of heaven… ahhhhhh

All the while the spider who was just hoping for this very scene to take place eagerly readies herself for the pounce. Taking in all of the bee with her 8 eyes she can just taste him. She can hardly wait, but she knows to not give herself away just yet. Moving ever so slowly the busy bee never sees her.

In one quick move she grabs it, stings it and wrestles it until her venom stills its life. It all happens so fast the bee doesn’t even know what’s going, but it begins to fight for its life in a struggle to the death. She holds its body tightly with her thorny legs. Instinct has taught her the struggle will not last long. They wrestle until the venom does its silent work and brings death to the bee. With a great show of strength she drags it away to a safe place to dine. Her dinner so easily won today. She affixes it with her silken threads to the underside of this zinnia and proceeds to consume it. She earned her meal fair and square.

Held in this moment is the exquisiteness of a life and death drama being played out under the petals of this pink zinnia. The uncomfortable reality of predator verses prey. Sometimes life wins. Sometimes death wins. Either way in this moment a new story has been woven.

Life and Death. One is not independent of the other. Existence is impossible without both. And both are what makes life a perpetual state of change, release, rest, growth, and expansion. We spiral in. We spiral out. Resistance is futile. It happens every day in every moment. The delicate balance of having an experience in a conscious existence.

When I consider the patience of spiders and their intuitive knack for building their webs or waiting on flowers perfectly still for very long periods of time for their prey I am able to see the grace in the deaths she deals.

Change can be a fierce teacher and we cannot evolve without it. It can be scary, intense, sad, and cruel. It can also be happy, funny, joy filled, and exciting. Change happens and there is no stopping it. How we perceive it is up to us.